内容記述: Caring for the Families of America’s Fighting MenThe American Red Cross is helping not alone to care for our fighting men in the war, but for their loved ones left at home.More than 300,000 families of American soldiers and sailors have been relieved of money troubles, legal difficulties and worries of all sorts by the protecting arm of the Red Cross.In money alone the help given, since the beginning of the war, will amounted to $6,000,000 by the end of the year－by that time, too, the expenditure for fighters’families will be at the rate of $1,000,000 a month.More important than financial assistance are the order helps that are being freely given, as in cases of sickness, worry over children, business difficulties, and failure to keep in touch with loved ones at the front.The Red Cross has furnished aid to thousands of dependents whose allowances and allotments under the War Risk Insurance law have been delayed in reaching them. Over 60,000 inquiries for help of this sort ware received during July and were promptly attended to.Twenty or more rush inquiries after the welfare of soldiers’ families are cabled over from France every day by the Red Cross－and at least 100more are sent daily by mail.Men in camp in this country and on the firing line in Europe are in touch at practically all times with Red Cross field workers who, when an appeal is made, communicate at once with the Red Cross in the fighters’ home town.Every request received, any facts revealed, are held in sacred confidence. No request goes unanswered－and no aid is denied that is within human power to render.More than 50,000 American men and women have volunteered to help the Red Cross in this week and they are serving on 10,000 local committees in all parts of the country.In carrying out is its great purpose, sanctioned by the Army and Navy and by President Wilson, the Red Cross has conserved human resources in fighters’ families. －it has given relief in emergencies; －supplemented Government provision for dependents; －encouraged disabled soldiers; －supplied information of every kind to men tin service and to their families; －and helped families to maintain the highest standards in order to keep pace with their fighters who are obtaining a broader outlook on life. It has maintained the morale of the Army and Navy by safeguarding the home and home interests.Help is given to all creeds and races. Aid is extended to every person who will accept it.It is not charity, but only that helpful neighborliness which is due to every fighter, from the entire American people.Bulletin 1. issued by The War Council of The American Red Cross, to show the American people how their generous contributions are being expended in the interest humanity.（アメリカの戦士たちの家族を保護するために） 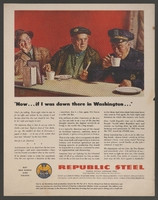 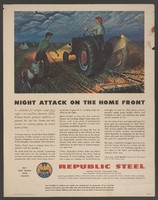 Night attack on the home front 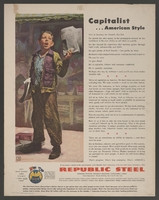